A psaltery is a stringed musical instrument, appearing in many different forms and styles throughout history. On some psalteries the strings were plucked, on others they were struck, and still others they were bowed. Plucked psalteries are probably of the oldest variety of psaltery, being very similar to a small harp or zither.

Look at this reference from thousands of years ago in the Bible:

Praise the LORD with harp: sing unto him with the psaltery and an instrument of ten strings. (Psalm 33:2)

But though the plucked psaltery dates far back in history, the bowed psaltery is a much more recent invention. There are numerous historical claims as to when the first bowed psaltery was actually introduced, but I believe that it was probably not until the early to mid 20th century that there was such an instrument in the form that is seen and played today. That is to say, a fully chromatic psaltery in a triangular shape, played with a bow, with strings running down both left and right sides.

Regardless of the exact date, it is clear that the bowed psaltery is still being continuously developed and improved upon. This freshness and openness is part of what I love about the bowed psaltery; and with a little luck, I hope to play if but a very small part in this developmental process.

The Sound and Tonal Characteristics of a Bowed Psaltery:

What’s so unique about the bowed psaltery is its sound! How can I explain it? Some have called it haunting; while I have also heard it described as: icy, ethereal, ringing, and probably a few others that I can’t think of right now. You can check out some sound clips to hear what I am talking about.

What the bowed psaltery excels at is in playing slow to medium tempo songs. Since the bow can really only play one note at a time, from the edge of the instrument, the bowed psaltery is mainly a melody instrument. (Though it is possible to play more than one note at a time by using a second bow in the other hand—a technique called double bowing.) The bowed psaltery works wonderfully on a lot of folk songs, hymns, carols, and anywhere else where you might want to utilize its haunting tone. Think Scarborough Fair, think Amazing Grace, think perhaps of your own compositions, think of all the beautiful acoustic possibilities!

Anatomy of a Bowed Psaltery:

In order to help you understand all of the parts and pieces of the bowed psaltery, I have created a little visual aid, an anatomy chart, for reference. 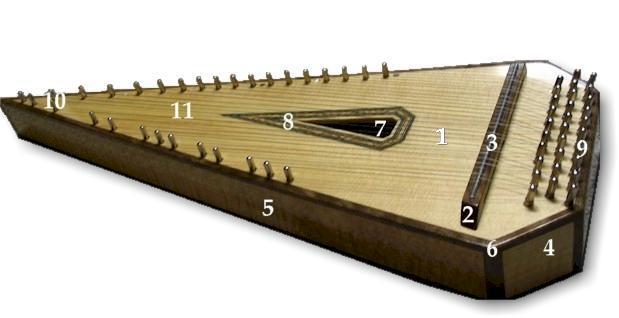 Maybe you have been looking at pictures of the bowed psaltery, with its many strings, and you are wondering exactly how you play this peculiar instrument—or bow it for that matter! I think you’ll be surprised to see that it is much simpler than you may think:

The above picture should clear up most of the confusion for anyone who has not seen or played a bowed psaltery yet. The strings are bowed on the sides of the instrument, not the middle. The bow is run in-between the pins on the right and left sides of the instrument, where there is an opening and only one string can be bowed at a time. (The low notes are toward the tip, and the higher notes are near the base of the psaltery.)

So, instead of changing your fingers’ positions like a violin, different notes are played by moving the bow up and down the side of the psaltery. Because there is so much perpendicular bow movement, psaltery bows are usually a lot shorter than violin bows. They are typically in the range of 14 to 20 inches long to facilitate easier and lighter bow movements.

If you look closely at many of the pictures of bowed psalteries, you will notice a pattern in the pins on the left-hand side. They are laid out in a two-three, two-three, etc.pattern, just like the black keys on a piano or keyboard. And as a matter of fact, that is exactly what these pins are equivalent to—the black sharps/flats on a piano. The pins on the right are equivalent to the white keys (naturals) of a piano. So, in a normal song, (depending on the difficulty, key signature, etc.) the majority of the notes will be played on the right-hand side of the psaltery.

One last picture/note to explain:

A feature that is common on many bowed psalteries is the use of note markers. Markers are used along the right-hand side of the psaltery to help players quickly get their bearings. Certain notes, (all the Cs and Fs on my psalteries), are marked with small dots or markers. Above, you can see two black mother-of-pearl (abbreviated MOP) dots between the pins marking the C notes, (on the far left and the mid-right of the picture), and one white MOP dot, (in the middle of the picture), denoting the F string.

In terms of how the instrument is held, I have heard and seen a variety of positions. The most common way is to hold the tip of the psaltery out away from your body with your left hand. Then you nestle the base of the instrument either on the inside of your elbow, or against your abdomen. The right hand holds the bow and does all of the playing. A variation on this is to just sit down and set in on your lap, loosely supporting the end with your left hand. (Or you can even balance the whole instrument on your lap and use a bow in both your left and right hands.)

Okay, perhaps there is one last thing that you are wondering: how is a bowed psaltery tuned? Good question.

In the picture above, you will notice a metal tuning wrench with a T-shaped wooden handle. (There are also L-shaped and gooseneck varieties available.) This wrench fits over the tuning pins and is turned clockwise or counter-clockwise to tighten or loosen the corresponding strings, respectively.

Personally, I use and recommend a digital tuner along with the tuning wrench in order to make tuning much easier, though you could use a piano or some other reference point to tune it too. It’s just that with dozens of strings, it sure is a lot of guessing and trial and error to tune the bowed psaltery by ear, rather than have a little gizmo spit out the exact note you are playing.

A digital tuner has a built-in microphone that “hears” the note you are playing, and tells you whether or not it is tune. Above, the note B-flat is being registered, and it is apparently slightly low (flat), as indicated by the red light in the upper left. (Flat is symbolized by a lower-cased ‘b’ and sharp is denoted with a ‘#’ sign.) If it were in tune, the needle would be right in the middle, and the green light would be lit up.

The frequency of tunings needed will depend on a number of factors, including how often you play it, where you play it, what climate you live in, how you store it, how you transport it, etc. But on the whole, bowed psalteries are more stable than most other bowed instruments, and should be reliable enough to pick up and play at a moment’s whim. (And after all, isn’t that what music is all about?)