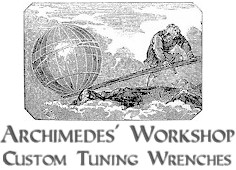 In 2008, I made a (brief) foray into making custom tuning wrenches for sale. I sold these offerings under the name “Archimedes Workshop.” (So named because of Archimedes’ fame in stating that with a long enough lever, he could move the world—and a tuning wrench is simply a lever.)

I initially made these wrenches because I felt the current commercial offerings were too short to get enough leverage to precisely tune a bowed psaltery. I basically had to destroy an existing wrench to extract the metal fitting from it, which was then refit into a new (much longer) handle.

The video above illustrates the process well.

If you own a lathe, the wrenches are incredibly easy to turn. Here a a few more examples of my work to help with ideas: